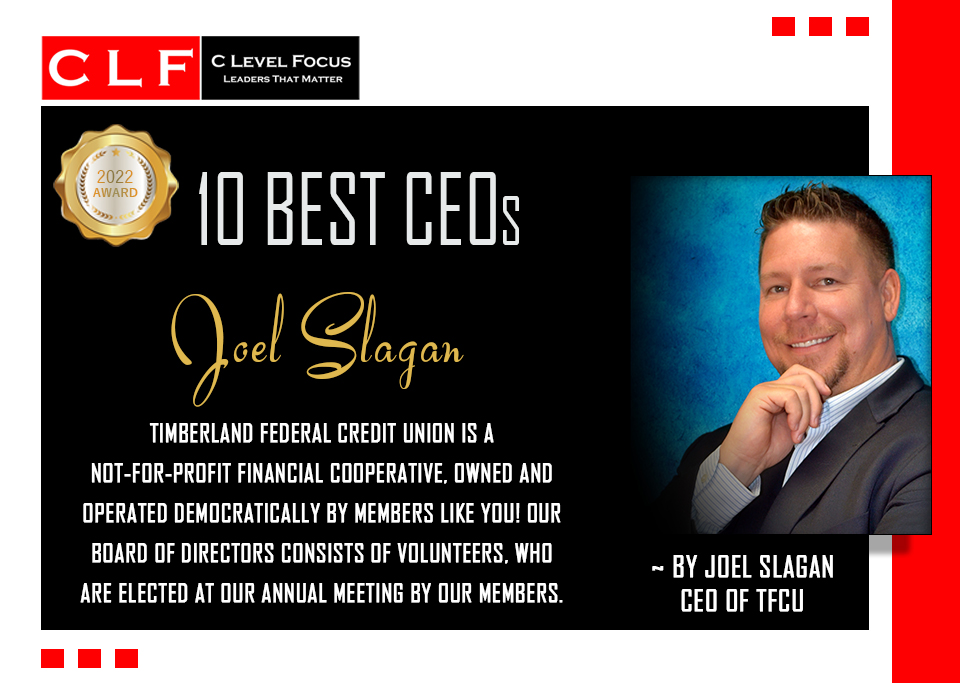 Surround yourself with competent professionals

The member-owned Timberland Federal Credit Union, whose slogan is "A credit union You can grow with," is making steady progress. Joel Slagan has been with the credit union since 2014, when he was hired to serve as the COO. His rise through the ranks saw him become EVP in 2018 and then President & CEO in 2019. Timberland FCU is a not-for-profit member owned credit union that faces challenges every day, and the most difficult task they had was getting the credit union's board, staff, and members on board with the idea of updating the institution. To make themselves more approachable, they made several changes and recruited new cast members.

Joel coached baseball and football for young players. He's presently building a financial institution collaboration program. Like a baseball or football team, he believes in communities helping each other. A touchdown requires a team, not just the passer or receiver, and he considers teamwork helped him become a leader. People are their greatest strength. With the appropriate people, you can do practically anything. Technology is the other part, in which Timberland onboarded Dixoncom to ensure member safety and staff efficiency.

The former and late Jim McCormack was admired for taking a chance on Joel and for his principles. Joel's success was largely due to his old supervisor, Chris Feather, who taught him about credit unions and accounting. Joel explained that he became who he surrounded himself and associated with, so it was not just one person alone. Joel continues to associate with people that he looks up to and is not sure that he deserves all the good friends he has, but he will take them. Mark, Shane, Bill and WAUM are just a few people that he admires. He'd be remiss not to acknowledge his past Navy colleagues that taught him about life itself in so many ways along with leadership skills. He can't mention everyone who inspired him, but the credit union movement has taught him much. He applauds the Crossstate Credit Union Association for all that they stand for. His caring children, Marissa, and Robby, already show leadership qualities and always puts others first. Joel taught them to speak and walk, and now he wants to be more like them.

"Some leaders are alone," says Joel. Others don't have the right people in the room or have none. Better leaders surround themselves with experts, he says. He learns from new staff and his children because titles don't matter to him. He rarely makes choices without staff or top staff input. He advises against fearing change and challenges. Leaders sacrifice for the team, and hence they should listen, demonstrate, and inspire others to lead, in his view.

Joel learned in the Navy that indecision is worse than making the incorrect choice. He knows emotions play a big role, and sometimes it's best to sleep on them. He's made decisions with and without sleep. Joel defines "knowledge is power" as surrounding oneself with smarter people than we are, listening to their advice, and drawing on our experience. The world had to make hasty decisions with COVID, some of which have been right, wrong, or indifferent, and if you have a smart team, you'll have the greatest contingency plans for when, not if, you collapse.

Joel believes repetition and comprehension are important communication tactics. Everyone's worldview is different; they may not understand you. In a fast-paced environment, old habits are appealing, and effective communication depends on employees understanding the purpose. In relation to this, Joel also believes that comprehending feedback aids in providing and receiving smooth feedback. He employs analogies to explain his ideas and rephrases what's explained to him to ensure he understands.

They had a goal for ancillary income and their members' stories were reward enough. An outside partner helped educate staff about ancillary products and how members might benefit. They made changes until they had the proper people to reach their goal. Their motivation was not monetary but rather to assist as many members as possible. They must remember they're here to educate, not sell. By shifting their focus from meeting the number to helping members, they met their goal and helped members.

Joel says they want to be a credit union that members can grow with and that has better community partnerships. He wants to be a trusted community partner, not just a financial institution. Partnering with Happy Valley Financial Services was a good move. Working with others helps Timberland's communities thrive and shows that its finances and partners can be trusted and can help communities grow.

"We must take on a new core provider that will be there for us in relation to where we are now, not where we were 15 years ago," justifies Joel. Change happens whether we like it or not, and we must adapt to those changes for our members, as they are the reason why we exist, he adds. He sees the credit union evolving a lot over the next year so that they can keep their motto: “Results not Excuses” as well as their vision "A credit union YOU can GROW with!"