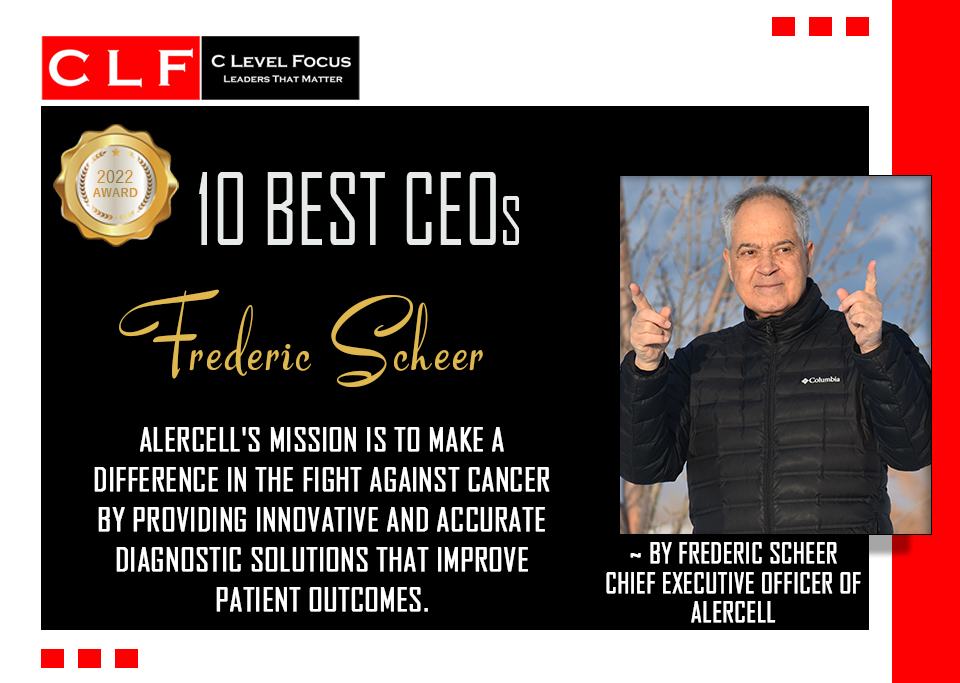 Frederic has been fighting cancer since 2017, when it was finally discovered, but it was not too early. He claims that as an entrepreneur he endured a series of health issues, but that these inspired him to launch Alercell, a company dedicated to the early detection of cancer. His new mission in life is to reform cancer detection practices at Alercell so that patients can avoid grueling treatment if the disease is detected at an early stage.

Christopher Columbus was one of the individuals who, according to Frederic, served as a model for him. Frederic has always found inspiration in the words of Christopher, "If you dare to think and live what you think, you can get somewhere." During the worst time of the war, Winston Churchill was the other individual who displayed a remarkable amount of character strength. In addition, Mother Theresa viewed the eyes of the lowest of the poor as gems. Like his parents, she taught Frederic respect for others.

15 years ago, Frederic established a private philanthropic foundation, The Scheer Foundation (www.scheerfoundation.org). Frederic devotes his time to helping the most vulnerable people in Africa, providing for 750 kids in several nations and learned respect and humility from it. He believed that sometimes it was harder to give than to receive, and therefore, in his view, it is crucial that we respect other individuals and understand the realities of various continents and countries.

When asked about his role as CEO, Frederic clarifies that CEOs must fight on all fronts while maintaining their sights on the major prize. You must manage big concepts and minor details. It's hard and lonely to steer a ship you've chosen while others criticize. The biggest challenge is that anything can happen at any time. To sum up, Frederic would state unequivocally, "Be prepared for the worst and the unexpected."

Frederic prefers to talk things over with people in person, over the phone, or via email. On a regular basis, you should update upper management on your strategy's progress, he suggests. To him, nothing beats a one-on-one meeting or a Zoom meeting for hearing someone's unfiltered thoughts. Frederic is someone who values input from others. It's something he does, and then he learns from it for the future. He is more concerned about seeing ethical behavior from his staff.

Frederic is naturally good at making snap judgments. Frederic has an excellent understanding of business, thanks to his four decades of experience at the helm of many enterprises. He often talked with his subordinates about options before making a move, but sometimes he would act quickly and decisively.

Frederic recalls making the choice to compete in the 2000 Summer Olympics in Sydney. Everyone assumed he was completely off his rocker. They were a little American firm that made biodegradable bags and cutlery. He took a flight from Los Angeles to Sydney after convincing a group of people to join him on the trip. It took a lot of energy and effort, and he sunk a lot of time and money into it before they finally decided to follow him. Frederic appreciates Australia for giving him a chance. He received a gold medal from Greenpeace for his efforts in making the Sydney Olympic Games the "Greenest Game Ever," and the clients were quite pleased with the results.

Soon, Frederic will release a new brand—the first diagnostic test for leukemia that specifically targets 51 genes—and everyone is more excited. Leukemia, he says, is a devastating disease that can quickly prove fatal. He believes that early detection is crucial because so many lives are lost because of it. They have discovered a method that can detect alterations that are indicative of leukemia. In January, this product will debut under the new Lena Q51® label. This project has his full attention and excitement. They are also preparing another study on lung cancer to be released in March 2023. Nanoparticles for medicine delivery are another area of focus. In addition, they work with traditional Microsoft software with a simple interface. He's quite pumped about all these upcoming endeavors.

In Frederic's opinion, the company's strongest asset is its employees. Everyone here truly enjoys their work, and for us, it's about more than just making a profit. They aim to give people a second chance at life by giving them the means to defend themselves. Perhaps it's his advanced years and his health problems, but he's determined to find answers that will spare others the misery of undergoing chemo that he's currently facing. Frederic asserts, "There is a better way, and we will find it."