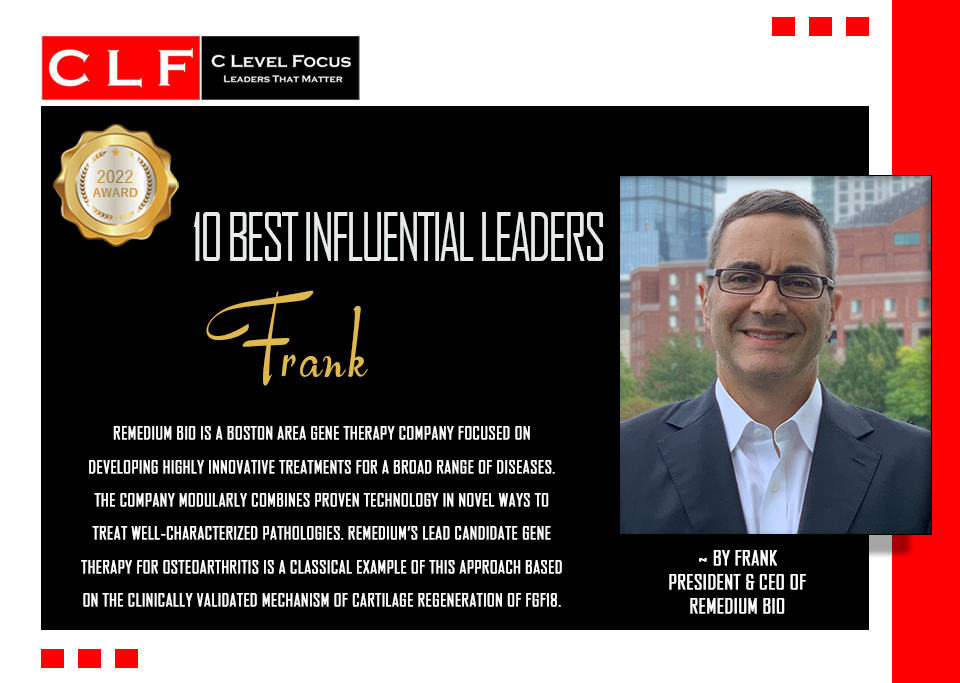 Leading the Charge to Tackle the Largest Unmet Clinical Need in Rheumatology – Osteoarthritis.

An engineer by training, Frank has always been drawn to building things. Early in his career, this desire manifested itself in his work designing processes to manufacture some of the early pioneering biologics in the first biotech revolution, when recombinant DNA technology allowed for the efficient production of therapeutic proteins to target once untreatable diseases. As his career progressed, Frank’s focus shifted, first to developing regenerative therapies and treatments for an array of ailments, and ultimately to building companies.

The desire to deliver life-improving treatments to patients led Frank to Anika Therapeutics, where he was responsible for bringing products to the market using a technology platform with applicability to a wide range of therapeutic areas. A core focus of his work for nearly two decades was developing therapeutics for the treatment of cartilage disorders and the management of Osteoarthritis (OA).

OA is the largest unmet clinical need in rheumatology, affecting 1 in 7 US adults with several hundred million people suffering from the disease across the globe. Today, OA is estimated to support a nearly $40 billion-dollar global market, with growth rates approaching double digits due to the aging population and westernization of diets across the globe. Despite a number of approved palliative therapies, which are able to manage OA-related pain, there are currently no approved treatment capable of slowing or reversing disease progression. As a disease of aging, OA results in progressive cartilage loss, which eventually translates to unmanageable pain and loss of function, oftentimes requiring terminal joint replacement surgery.

There were many successes at Anika, where a number of leading OA therapies were brought to the US and global markets including the US-market leading hyaluronan viscosupplements Monovisc® and Orthovisc®. Frank was also instrumental at launching the world’s only drug-device combination steroid-viscosupplement – Cingal®, which is the fastest growing viscosupplement globally for the management of OA pain. Despite these successes, however, something felt unfinished. While effective, this product class is unfortunately unable to slow or reverse the disease, having no “disease modifying effect”. In fact, no approved therapies are able to do that. This therapeutic holy grail has been elusive to date, despite being the focus of drug development efforts by many large pharmaceutical companies.

The challenge in treating OA has always been twofold. First, identifying a therapeutic capable of promoting cartilage regeneration and, second, overcoming the dynamics within the joint that result in rapid clearance of drugs delivered to the cartilage tissue.

It was two years ago when pieces of the puzzle finally started falling into place. First, was the identification of a protein, human fibroblast growth factor FGF18, that showed the ability to reverse cartilage loss in OA patients. Moreover, in a placebo controlled clinical study, this protein demonstrated a clear dose-dependent response – a result never previously observed in OA therapeutic development. The catch was that treating OA with this protein required frequent and continual injections into the joint, an approach that limited both the treatment’s safety and effectiveness.

With the proof of biology complete, Frank had an idea that would become Remedium Bio – replace the multiple injections of the FGF18 protein with a single injection FGF18 gene therapy. The approach would deliver the genetic instructions for FGF18 in a highly localized manner, directly to the joint, allowing the cells of the joint to express more of this endogenous protein where it has been demonstrated to produce a disease modifying effect.

This approach would not only eliminate the need for patients to receive dozens of joint injections to treat their OA, but could also potentially provide an opportunity to enhance effectiveness, completely arresting or reversing disease progression after just a single dose.

Frank founded Remedium Bio with a vision to streamline product development by applying proven technologies in novel ways, to treat diseases with well characterized pathophysiology and established proof of biology – as in the case of FGF18. Having attracted a number of rheumatology industry executives he quickly closed a seed round of investment that is funding a collaboration with a leading OA-focused research laboratory in Boston. It wasn’t a full year when this approach began to yield results confirming the potential efficacy of the FGF18 gene therapy treatment. Now, with data in hand, Frank and the Remedium team are starting to share their results with the orthopedic and longevity communities and planning for a larger raise that will fund the advancement of the only single-injection, potentially disease modifying OA treatment to the clinic.